We all enjoy the benefits of natural gas in one way or the other, directly or indirectly, without questioning how the BTU of natural gas is made available to us. However, a lot of integrated processes requiring huge investments along the whole value chain are involved before it reaches us. First, the E&P companies need to explore, drill and extract natural gas from the ground. Then the transmission companies link the gas fields to major consuming areas either via pipelines or LNG. Finally, the Local Distribution Companies (LDCs) deliver the natural gas to our respective homes. 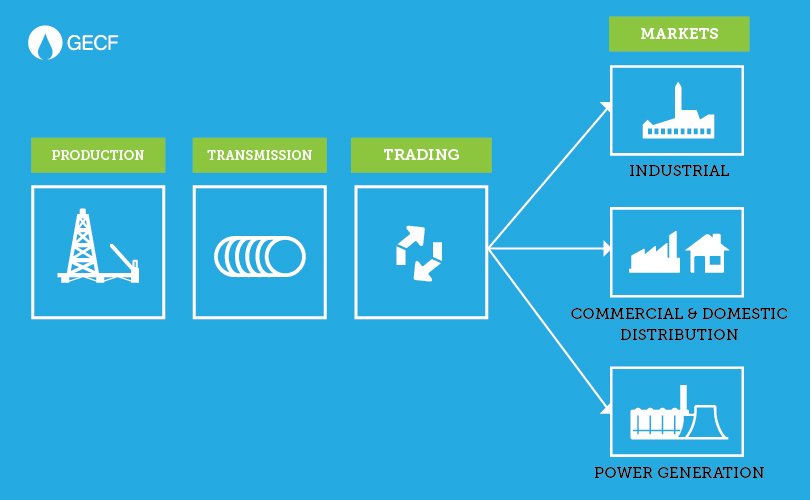 What are the major uses of natural gas?

Why is natural gas the fastest growing and preferred energy source?

The natural gas resources base can last for about 234 years at the current consumption rates supported by the technological innovation that allowed additional extraction of natural gas in unconventional rock formations like shale, tight sands and coal beds.

Natural gas can be used in variety of ways from electricity generation, running of the manufacturing plants, feedstock for a range of products, heating & cooling as well as fuels for transportation.

On an energy-equivalent basis and the recent gas prices, abundant supplies of natural gas are available at lower prices when compared to energy content of other fossil fuels.

Of all the conventional energy sources, natural gas is the most efficient (reaching up to 60% efficiency) when combusted in the internal combustion engine of gas fired power plants. This allows the utility companies to generate more electricity with less fuel consumption.

What is Natural Gas?

The “rotten egg” smell associated with natural gas is due to the addition of an odorant called mercaptan to facilitate the detection of natural gas during leakages for example.

Like oil and coal, natural gas is a fossil fuel widely believed to have been formed when the remains of plants & animals that lived billions of years ago are compressed under the earth, at very high pressure for a very long time through a process called thermogenic methane.

Is Natural Gas a new source of energy?

Natural gas has been used in homes since the first century A.D. in Persia following its seepage from the ground and its ignition by lightning, thus producing continuous flame that burned day and night. Thus natural gas has been the fuel of the past, present and of course the future.

Natural gas is composed almost entirely of methane, but does contain small amounts of other hydrocarbon gases such as ethane, propane, butane, pentane and non-hydrocarbon impurities.

Both conventional and unconventional gases are the same in terms of their chemical composition which is majorly methane. The notion 'unconventional gas' is used to signify the fact that these types of gas resources are found within the source rock where they are generated and cannot move due to ultralow permeability while for conventional gas they migrated, over a geological timeframe,  through a suitable path and accumulate in a reservoir rock capped by a seal. Because of their unusual geological locations, they require special technologies and techniques before they can be extracted.