The impact of US-China trade war on the global economy

The long and tedious process of US-China trade talks has not moved forward much in Osaka, despite the easing tensions. There is already a 25% tariff on $200 bn worth of Chinese goods from the US (29% of US imports as of 2018). And the Chinese have retaliated with tariff rates of 20-25% on $60 bn worth of US exports. US LNG is targeted with a 25% tariff rate.

Although the direct Trump-Xi talks have avoided a new escalation, an agreement is a long way from being reached. Optimism fades as rhetoric intensifies. The latest round of tariff hikes in May exacerbated cyclical threats to economic growth in 2019-2020, and could take an extra 0.2-0.3 percentage points out of global growth in 2019 alone.

After five quarters of tariff hikes, there is already a toll on international trade and global economic activity. In 2018, Chinese exports to the US went down by 27%. On top of that, exports to Japan declined 16% and exports to South Korea went down 18%. The global trade volume in 2018 also slowed down to 4.1% from 5.5% in the previous year, reflecting in part the global supply chain effects from the US tariffs against China and other countries. 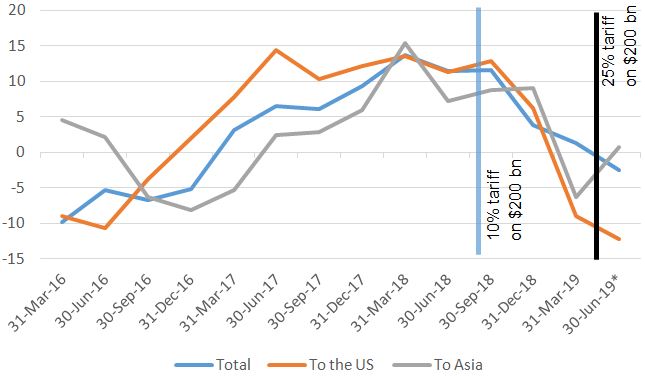 The US only represented 8.7% of the global trade volume as of 2017, and China represented 12.7%. Chinese tariffs were  part of a broader US trade agenda, such as 10% steel and aluminum tariffs, and last year provoked retaliatory tariffs from the EU, Canada, Mexico (lifted after a new trade deal was reached), India and several others. Tariff coverage of other countries was much more limited and stayed at a $3 bn range. For China, the tariffs of 10% initially covered $50 bn, and subsequently $200 bn of US imports, while the whole US imports from China represent less than 20% of Chinese exports.

Economic activity in China and the US is already slowing down, albeit the exact role of tariffs already imposed and ongoing trade tensions into that is unclear. Industrial production in China since 2017 stays at decade lows below 6.0% year-on-year, and started to decline further to 5.0% in May. In the US, industrial production is slowing down to below 2.0% as compared to 3.9% in 2018, despite robust GDP growth in Q1.

The implications for the medium-term are not optimistic either as there are two adverse effects of this trade tension. First, the tariffs have already started impacting the global value chains (GVCs). According to the UNCTAD, 17.3% of Chinese exports are made with foreign components, and the US is the second-largest foreign input provider (11.2% of foreign content), mainly of “other business services” that typically include financial services and software. On the other hand, China is the main foreign input provider for US export within the GVCs. Redistributing supply chains to avoid tariff damage would take multinational companies several years but it will strand the investment already made and increase the costs for the final consumer. Secondly, while the prospective terms of trade stay unclear as they are, the increased uncertainty will impair new investment decisions worldwide. An AmCham survey in December 2018 among 314 branches of large American companies in China indicated that 30% has had a negative financial result in 2018, and two thirds of them aim to significantly change their strategy after 2018, even before the May tariff hike. While the full effect is harder to quantify, the changing China trade patterns with Japan and Korea suggest that the impact is wider than just the two counties.

Regarding the energy markets, natural gas demand in China is least likely to suffer from the decline in economic activity for two reasons. First, the industry in China still relies mainly on coal, with industrial energy demand representing 24.9% of gas consumption in 2018. Transport only represents 10.3% of gas demand. About 40.2% of gas demand is based on power (10.3%, mainly peak load) and domestic sectors (27.9%), which are less dependent on economic activity and specifically on export trends. Secondly, in the medium-term, the ongoing transition from coal to gas in China is a stronger driver of gas demand trends than economic activity, as it is expected to add up to 35 mtpa (18.2% of demand) just following the trends of 2016-2018 in domestic and power sectors.

Impact on the international gas trade and implications for the GECF

However, the US exported just four cargoes to China since the period the tariff was in place (September-May), compared to 35 cargoes a year before, when China became the second-largest market for US LNG. Price was not the only component to this, as Chinese importers reconsidered US supplies even before the 10% tariff was introduced. Since February 2018, there were no long-term Sino-US deals, even though Chinese importers signed 7.62 Mt of SPA and HOA (4.5 Mt SPA) for the new deals in 2018-2019 up to date.

From 2019 to 2020, when the tariffs could be still active, Chinese LNG imports are expected to grow by 25 Mt, or 18.75% or the 2018 global imports. Tariffs would prevent US LNG from taking that niche, despite the rapid buildup of new LNG capacity. The increase in other Asia Pacific LNG imports is projected to be much less, at 5 Mt in 2019-2020, as Japan and Korea demand is stagnant, and the new US LNG will compete with new projects from Australia and Russia, in addition to existing players.

In case tariffs stay in place longer, the gap freed up by the US LNG in Chinese market in the medium-term is expected to reach 15 mtpa, though it is expected to be filled mostly with short-term deals pending the result of the trade talks.