The Groningen gas field has been one of the main sources of European domestic gas supply since its discovery in 1959. However, after recurrent earthquakes and impacts of seismic activities, the Dutch government decided to cap the natural gas production from the field. The first cap was set in 2014 and since then the Groningen field output and its share in Dutch’s total gas production has been diminishing. Thereafter, in September 2019, the Ministry of Economic Affairs and Climate Policy of the Netherlands announced that the production from the Groningen gas field will be limited to the exceptionally cold winter days only, from 2022 onward, with the ultimate goal of shutting it down completely by 2026. Such a decision is resulting in a complete abolition of natural gas output from the field, and it will not only affect the Netherlands domestic gas market, but also the European market that used to a more than 10% of gas supplies reliance from the Groningen gas field, in 2013.

The process of dismantlement of Groningen gas field is illustrated in figure 1 below.

Figure 2 below represents the trend of total Dutch natural gas production and the contribution of Groningen gas filed to it. 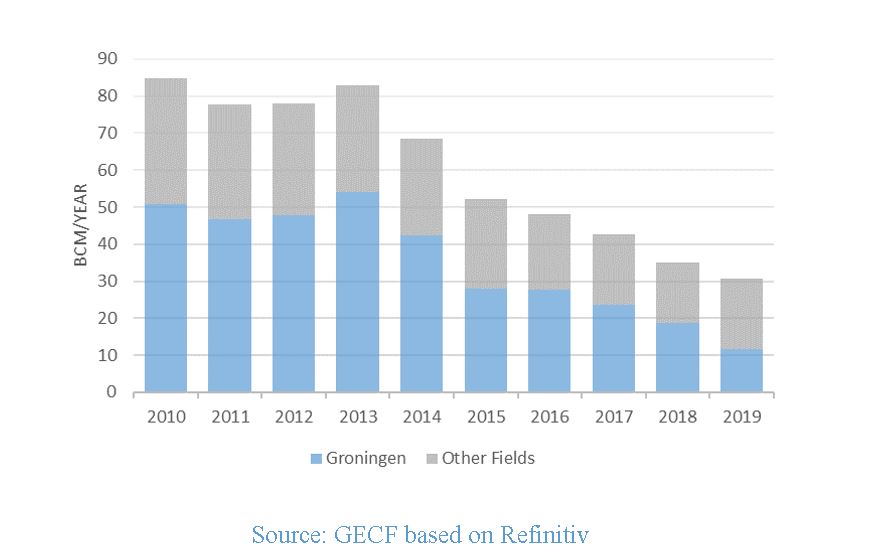 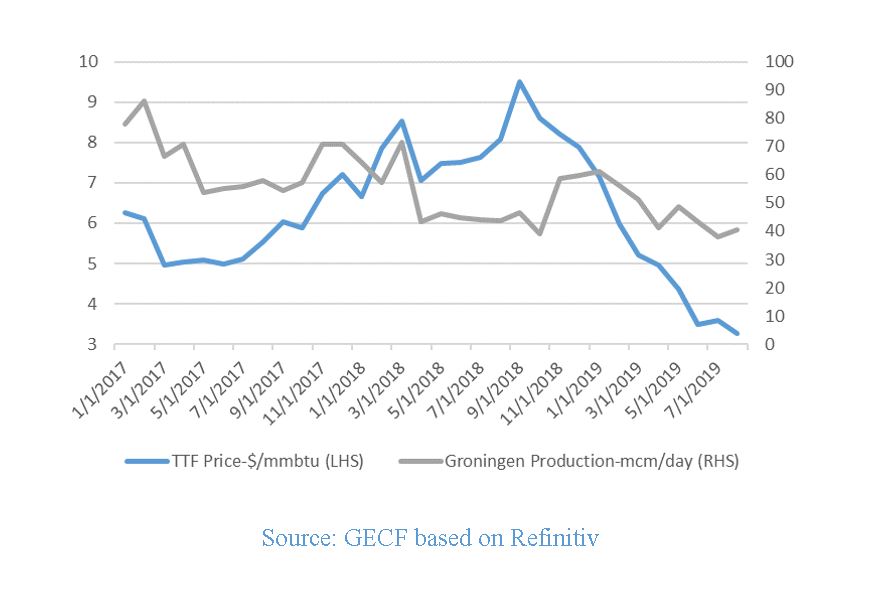 The closure of the Groningen gas field does not affect significantly the TTF prices, as the caps were implemented gradually and are not considered as supply shock to the markets. In addition, as the share of Groningen gas field represented around 2% of the total volume of traded natural gas in TTF Hub, these have been easily replaced by other supplies from the market (LNG and pipeline gas).

What we have observed in fact, is that the market could adapt itself by accommodating the shortage of supplies from the Groningen gas field from alternative supply sources and no significant disruption was observed. It means that the volumes of natural gas due to the production cap on the Groningen gas field was well substituted with other sources such as LNG or pipeline gas. Massive pipeline gas from GECF is coming to Europe (more than 100 Bcm of annual capacity) in upcoming years, in addition to significant LNG volumes from GECF and Non GECF exporters driven by the commissioning of new LNG exports facilities from Russia and the US.

While the indigenous production declines in the medium-term in Europe, driven by the depleting gas fields, the demand for natural gas will remain almost constant. Therefore, it is expected that the gap between domestic natural gas production and consumption will increase in the medium-term. As a result, more piped gas and LNG is required to meet the growing differential between supply and demand in Europe.

The current situation of very low spot prices in Europe, well below 3 US$/MMBTU for volumes traded on TTF and NBP, is posing challenges to the newcomers to the European market, where the demand is the real unknown that brings opaqueness to the investors in the gas value chain. At such level of prices, the sustainability of the LNG business of new producers may be challenged.

Currently, GECF is supplying almost the entire European pipeline gas imports, and more than 90% of imported LNG of the continent, these figures illustrate the vital role of GECF as a resilient supplier of natural gas to Europe; and GECF Member Countries will remain reliable and resilient suppliers to the continent with a solid historical partnership.