The beginning of the new decade has seen oil prices declining sharply. The ongoing coronavirus (Covid-19) pandemic has put a lid on oil demand growth. In fact, in its latest Monthly Oil Market Report, the Organization of the Petroleum Exporting Countries (OPEC), projects oil demand growth in 2020 at 60,000 barrel per day (b/d) from 2019. This growth compares to OPEC’s 2020 demand growth projection from a couple of months ago at more than 1 million barrel per day (mb/d). The marked slowdown of demand growth, coupled with the break-up of the OPEC and Non-OPEC supply adjustments as of April 2020, has had an effect on oil prices. At the time of writing on 22 March 2020, Brent trades at below $29 per barrel, which is $35.71 barrel lower year-over-year.

This article analyses the impact of a prolonged low oil price period on the oil production and gas market over the short- and mid-term of the top-3 oil producers, namely the Kingdom of Saudi Arabia, the Russian Federation and the United States of America.

A supply glut has kept oil prices relatively low in recent years as at the 3rd OPEC/non-OPEC producing countries’ Ministerial Meetings coordinated production cuts to help restoring oil market balance. The current Declaration of Cooperation of OPEC/non-OPEC expires at the end of March 2020. This means that from April onward, countries that accepted the 2016 Declaration of Cooperation can produce as much oil as they want, unless these producers reach a new agreement.

The oil price has been declining and the oil market has been oversupplied by a combination of factors such as American frackers supplying shale oil in the US and increasing conventional supply from countries, such as Brazil and Norway. On top of that, the impacts of the Covid-19 outbreak, collapsed the oil demand in main markets such as China and has therefore resulted in an excess of millions of barrels of oil. Consequently, industrial output has fallen sharply, resulting in depressed global economic growth.

OPEC+ conducted meetings in early March 2020 to cut back oil production by an additional 1.5-1.8 mb/d. Russia, as the de-facto leader in the non-OPEC group, could not accept to participate in additional cuts and talks between OPEC and Russia ended without result. Oil prices dropped by nearly 10% following this surprise move by Russia.

Aramco, Saudi Arabia's national oil company responded in a statement on March 11th that the company would raise its oil supplies to 13 mb/d as of April. Aramco slashed prices by offering these unprecedented price discounts.

As Saudi is poised to add oil to the market, it is expected that demand continues to decline. Furthermore, Abu Dhabi National Oil Company (Adnoc) has also announced that the UAE has decided to increase its oil output from 3 mb/d to more than 4 mb/d, which would be mainly from the onshore and offshore of Upper Zakum field. The UAE’s current oil production capacity is around 3.5 mb/d and could rise to 4 mb/d by the end of 2020. Adnoc announced that it will raise its production capacity up to 5 mb/d by 2030. The UAE’s highest monthly crude oil production to date was achieved in November 2018, when it flowed 3.336 mb/d .

That being said, it is expected that other OPEC members using the same approach will increase their production level, pushing oil prices down further.

Chinese demand has plunged during the last several months, and global quarantines and travel restrictions have caused a slowdown in industrial output which has resulted in oil demand falling across other parts of Asia, Europe and the US.

Brent crude could fall to the low $9-$20s per barrel for the global market according to some energy and investing companies (e.g. Goldman Sachs  and Rystad Energy ). The combination of economic slowdown, weak oil demand and oversupply by OPEC+ countries could prolong low oil prices. Assume Brent and WTI crude prices are prolonged at an average $35 and $32 per barrel respectively for the remainder of the year and sustained till 2025. Under these conditions we analyzed the impact of a sustained period of low prices under the Low Oil Price scenario, compared to the Base Case scenario on the top-3 oil producers.

The Saudi Aramco is dubbed to be the largest company worldwide by market capitalization and it is active on all segments of the oil value chain – upstream, midstream, downstream. Furthermore, Saudi Aramco enjoys very low crude oil production costs at below $10 per barrel on average, which is a key element of the country’s oil industry structure and has a huge spare capacity to ramp up its production level.

Saudi Arabia's highest monthly crude oil production to date was achieved in November 2018 when it pumped at a record of 11.09 mb/d. Considering these low oil production costs (low oil prices are therefore not a constraint) and a Low Oil Price scenario, Saudi policymakers would opt to ramp up supplies from storage and possibly additional drilling to counterbalance revenues lost due to low oil prices. This also would be possible as Aramco would be able to maintain its crude production at maximum capacity until the end of 2020 without any further increase on its CAPEX or OPEX.

Therefore, in the Low Oil Price scenario we forecast Saudi Arabia’s crude oil production to increase and to oscillate at around 13 mb/d between 2020 and 2025. In the Base Case scenario, the OPEC/non-OPEC oil production cuts would level off, Brent oil prices hover at $63 per barrel, and Saudi’s crude oil supplies remain at around 10.5 mb/d.

Russia’s oil industry is comprised of a number of companies with a mixed shareholder structure (state-controlled and privately controlled). The country also enjoys relatively low production costs due to its large greenfields, at below $20 per barrel for the bulk of the production of the country (West Siberia, Yamalo-Nenets and Volga-Urals regions). Additionally, the country’s production capacity hovers at around 12 mb/d.

Although Russian producers cannot increase production as much as Saudi Aramco, a low oil price period would encourage Russian producers to supply at the margin in order to make up for the low oil price revenue lost and would slightly increase supplies compared to the 2019 level. It should be noted that Russia’s highest monthly crude oil production to date was achieved in February 2019, when they produced 11.29 mb/d of oil. Even though we forecast that the country’s oil production will start to decline after 2022, Russia is currently able to bring an additional 300,000-400,000 b/d to market within some months.

Furthermore, the government’s decision to free the Ruble in 2014 when Russian currency fell from about RUB35 to dollar to a low of RUB80 has created a mechanism to cushion the economy away from oil income. Currently Russia’s production costs are largely denominated in Rubles. The Ruble/USD exchange rate is negatively correlated with the oil price and a low oil price usually transfers into a depreciation of the Russian Ruble to other key international currencies.

This mechanism gives Russian crude producers and exporters some operational cushion in periods of low oil prices (oil exports’ revenues are in USD, while production costs are in Rubles), which is an important consideration behind the projected increase in Russian oil supplies in the low oil price period. In this regard, the Russian finance ministry said that Russia could withstand at $25 to $30 a barrel for 6 to 10 years .

The United States of America

The growth in US crude oil production over recent years has been attributed mainly to production growth from tight oil plays, which have been operated by numerous small-scale producers. Quick start-up and closure rates are the main geological characteristic of these plays. Moreover, the tight oil operators usually exhibit a high degree of dependency on oil prices for production. For example, the decline of oil prices in 2014 forced US tight oil producers to decrease production, which was not profitable at the low oil price levels observed throughout 2015.

Furthermore, US tight oil producers’ financing relies mainly on debt markets so debt holders can affect decision-making in times of low oil prices. An important factor to consider is that the majority of the exploration and production companies in Texas and North Dakota (the headland of the US tight oil production growth) are expected to be hardest hit by an energy slowdown and will need a WTI price of above $50 per barrel to cover capital expenditures. Therefore, the US shale industry cannot afford current low oil prices. 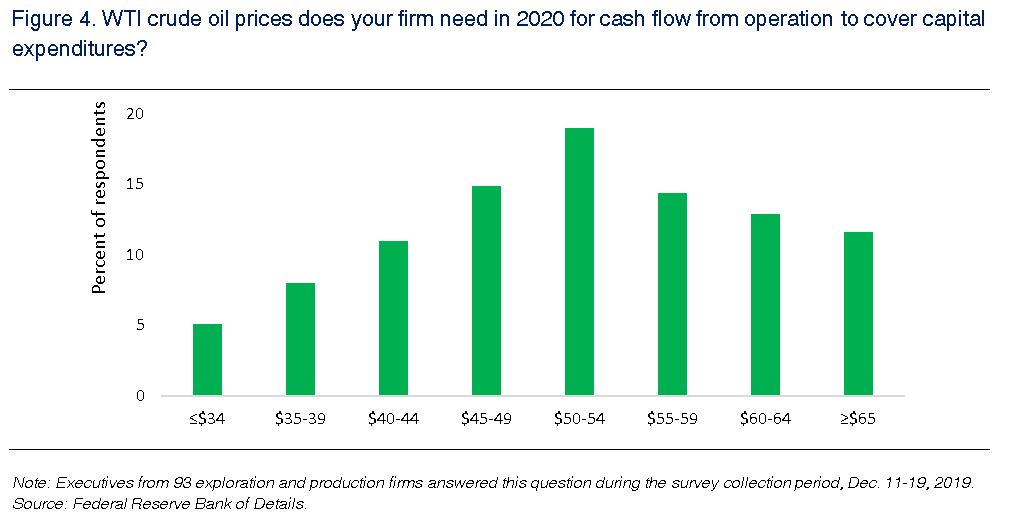 Consequently, the recent decline in oil prices has driven these companies to start cutting on their capital expenditures (negative quarter-over-quarter growth for the last two quarters of 2019).

Taking all these factors into consideration, a collapse of shale drilling would see the US production declining rather than growing.

Saudi Arabia and Russia can tolerate lower oil prices, allowing them to increase their production. However, for the US we forecast that the country’s oil outputs will decline in a Low Oil Price scenario and consequently the US will lose its position to Saudi Arabia as the world’s largest oil producer in the world.

What are the potential consequences?

The crude oil price is basically determined by its supply and demand and is strongly influenced by many irregular events. Oil price volatilities are interrupting economic activity and most countries, either as producers or consumers or both, are affected by this volatility. For instance, sharp increases affect the economic growth and inflation in oil importing economies. On the other hand, crude oil price falls wreak havoc on government budgets that depend on oil revenues (e.g. the Mena countries). The breakeven fiscal oil price for many oil exporters is above their current oil price, and that creates a budget deficit for the government, unless policymakers change the behavior of the oil exporting countries.

As can be seen from the figure below, due to the US sanctions imposed on Iran, the government needs a price of $195 per barrel in 2020 to balance its deficits. In response, the government diversified its economies from oil by enacting higher taxes and phasing out all kind of energy subsidies.

Algeria’s 2020 budget is based on $60 oil price  and with current oil price, the government probably will slash its budget for 2020 in order to be able to fund its expenditure. According to the IMF, Saudi Arabia needs slightly less than $84 and for the UAE will be $70 per barrel this year. Qatar has the lowest breakeven fiscal oil price of about $46 per barrel in 2020.

Furthermore, crude oil price volatility provides further incentive to rely less on oil and its derivatives, as it will present risk for deferred investments for many investors and companies. This volatility drives competition and is a further incentive for other energy sources, including renewables that will be seen as not only environmentally attractive, but also economically stable.

What does an oil price fall mean for LNG?

As the majority of global LNG projects in the US, Australia, Qatar and Russia are sourced from non-associated gas, low oil prices have not had much impact on LNG supply over the short- to medium-term. The downside risk is from associated gas production mainly from unconventionals in the US (e.g. especially based in the Permian region)  and Canada that could keep gas production flat. With sustained low oil prices around $30-$35 per barrel, the US LNG will become less competitive versus oil-linked term LNG.

There is a growing environmental concern and gas is part of the solution equation, which will support gas demand growth. Lower prices for oil-indexed contracts should support switching from coal to gas in the power and industry sectors in many regions.

Many markets move away from the oil-indexed prices. However, low oil prices would translate to declining gas prices for these contracts which are oil-based (fully or partially). Nonetheless, many contracts employ a certain upper and lower limit to rising or declining prices, which is a standard consideration for consumers and producers, respectively. This feature is not typical with oil contracts. Therefore, gas prices (oil-indexed) can decrease only this much and not as much as oil prices.