The relationship between volatile WTI and natural gas prices

Natural gas prices around the world declined and WTI prices remained highly volatile over the past weeks. Indeed, it could be consider that the high volatility of crude prices might translate itself into the natural gas markets and prices. We recall the steep decline (minus more than 300%) of the NYMEX WTI price in April. The correlation among daily prices is usually a good indication of the relationship between these energy commodities. In this regard, we note that between March and May 2020 there has been a significant positive relationship between the WTI and the Brent crude oil benchmark prices, as well as a positive relationship between Japan LT and WTI prices. Interestingly, the analysis shows that for the same period in 2019 there was a significant negative relationship.

The underlying factors are multifold. First, crudes are traded based on the short-term spot prices contracts. Secondly, refiners generally purchase crude oil (depends on light or heavy crudes) for processing of 90 days in advance. By contrast, most natural gas contracts are usually long-term and accordingly such contracts were concluded before the COVID-19 situation had started. Also, due to tough competition among producers in Henry Hub, the spot market pricing is usually considered to be the dominant market pricing mechanism. 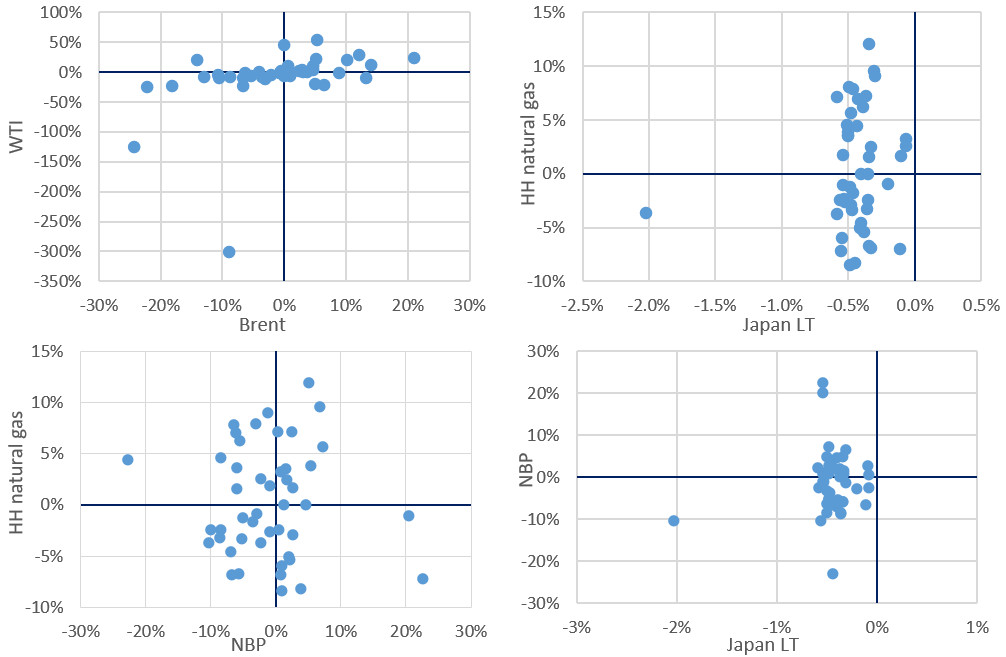 Source: GECF Data Bank, and the US EIA

The NYMEX WTI price plunged on April 20th by more than 300% day-over-day and settled in negative territory (-$37.63/bbl) for the first time on record. NYMEX WTI is a financial tool (futures contract) used primarily for risk management and mitigation (hedging). On that day, the NYMEX WTI contract for delivery in May was about to expire, leaving contract holders exposed to a physical oil delivery into the landlocked and logistically-constrained Cushing in Oklahoma (market players usually close their future contracts by means of cash settlement, ahead of the contracts’ expiration).

Moreover, during this time Cushing’s storage facilities have been quickly approaching storage capacity of 76 mb, implying higher storage costs for new physical crude deliveries. While it should be distinguished between the NYMEX WTI price and the price of physical (spot market) crude oil, NYMEX WTI’s sharp decline reflected the overall market situation in the US and global oil market. The COVID-19 imposed restrictions significantly dented demand, resulting into a pronounced build-up of oil stocks around the globe. For example, physical crude oil stocks at Cushing increased a whopping 2.1 mb week-over-week, whereas total US commercial crude oil stocks moved up by nearly 5 mb week-over-week, according to the EIA Weekly Petroleum Status Report  for the week ending on May 1st.

As earlier discussed, the NYMEX WTI futures price turned negative shortly before the contract was due to expire. With this line of reasoning, it is sound practice to explore the possibility of the NYMEX WTI futures price falling to negative values in the future. It is worthwhile to analyze different aspects of this possibility, namely stocks and storage levels, in light of the balance in the supply-and-demand.

Cushing crude stocks have been increasing over the past weeks. They stood at 65.4 mb for the week ending on May 1st. This volume is approximately 10 mb below current working storage capacity at Cushing.

On the crude oil demand side, we note that US refinery intake has been reported by the EIA at 12.97 mb/d for the week ending on May 1st. This is more than 3 mb/d lower, or 23%, compared to the lower bound of the latest 5-year range. At the same time, US crude oil production has also been declining over the COVID-19 period. However, not as pronouncedly as refinery intake has. The relative mismatch between supply and demand could, in turn, exert additional pressure on the WTI futures prices, shortly before the contract for June physical delivery expires.

Source: The US EIA

Technically the answer is yes. Negative prices are possible for energy commodities that have high costs to store, like natural gas, or in electricity markets due to intermittent renewable energy supply and other rigidities. Basically, all energy markets are characterized by sluggish demand and supply. Therefore, any shock, either on the supply or demand side, can have large effects. In this regard, in January 2020 due to the pipeline constraints, natural gas prices in the forward market at the Waha Hub in the Permian in West Texas and eastern New Mexico (associated gas from shale oil wells) have been traded below zero, although producers were flaring it mostly, as shale oil prices are higher than unwanted byproduct gas. However, it is still economically beneficial for shale oil drillers to produce the associated gas.

While COVID-19 supported the recent oil price plunge, natural gas prices also witnessed a historic low over the past weeks. The market is in contango as shutdowns across the world continue to depress the demand. The LNG market was already oversupplied before COVID-19, while currently the regional gas storage facilities came close to their nameplate capacity. According to Gas Storage Europe’s Aggregated Gas Storage Inventory, as of May 5th, European natural gas storage inventories became approximately 64% full . Although it is not the highest ever recorded level, it is still significant as some countries like Portugal, Belgium and Spain are facing capacities of over 98%, 85% and 72%, respectively.

If the very low oil and gas prices become prolonged, it would finally force the operators, especially in the US to shut-down the oil and gas wells and declines in the production. Further to this, being at maximum storage capacity and extremely low prices have caused some LNG producers to announce production cuts and cargos cancellation. Shell has decided to reduce its LNG production to 7.4-8.2 MT this quarter (April-June), from 8.88 MT in the first quarter of 2020. In addition, the loading of up to 20 US LNG cargoes that were scheduled for June has been cancelled by Asian and European buyers . Total that earlier rejected Chinese LNG buyer's force majeure requests, now forced to consider the cancellation of some LNG cargos in the second half of the year. In March Indian LNG importers, not only cancelled an import of more than 10 LNG cargoes, but also have issued force majeure notice with suppliers in Qatar and Australia to scheduled deliveries of LNG cargoes. Furthermore, per request of world's top natural gas importer, China, the central Asian countries namely Turkmenistan, Kazakhstan and Uzbekistan have decided to cut proportionally gas supply via the Central Asia–China gas pipeline system to China .

Considering all the factors that have discussed, GECF, as an intergovernmental Forum of 20 countries, which globally controls over 72% of proven gas reserves, 46% of gas production, 55% of pipeline gas exports, and 61% of LNG exports, can play an active role to stabilize the volatile natural gas markets through the exchange of experience, views, information, and on top of that, coordination among its Member Countries.