Gas and LNG will continue to be one of the most effective solutions in the transition towards global energy transition. However, there are some limitations to the feasibility of pipeline gas and traditional LNG supply. In this regard, the traditional LNG value chain has been adapted to overcome geographic and infrastructure constraints, as well as add flexibility to reach niche sectors and new markets. The LNG industry has undergone considerable evolutions over the past decade and witnessed the development of innovative LNG solutions. Small-scale LNG (SSLNG) and LNG-to-power projects are leading the way in developing these downstream LNG markets, and present significant potential to creating demand and meeting the growing energy needs of the world.

The International Gas Union (IGU) defines small-scale liquefaction and regasification plants as those with capacities of 0.05 mtpa to 1 mtpa. Small-scale LNG carriers are defined as those with a storage capacity of less than 30,000 cubic meters.

The SSLNG network can service a wide range of end-users including small-scale gas-fired power plants, city gas distribution networks or directly as fuel in vehicles. Thus, SSLNG provides supply to specific end-users that the conventional LNG infrastructure would not be able to reach, or to those requiring liquid fuel. This niche demand segment can serve in marine and road transport, as well as providing off-grid power for industrial and residential end-users. In addition, SSLNG has been gaining popularity with existing LNG regasification terminals being modified to facilitate other operations such as break-bulk, truck loading and bunkering. Figure 1 below summarizes the main applications of SSLNG in the various niche markets. 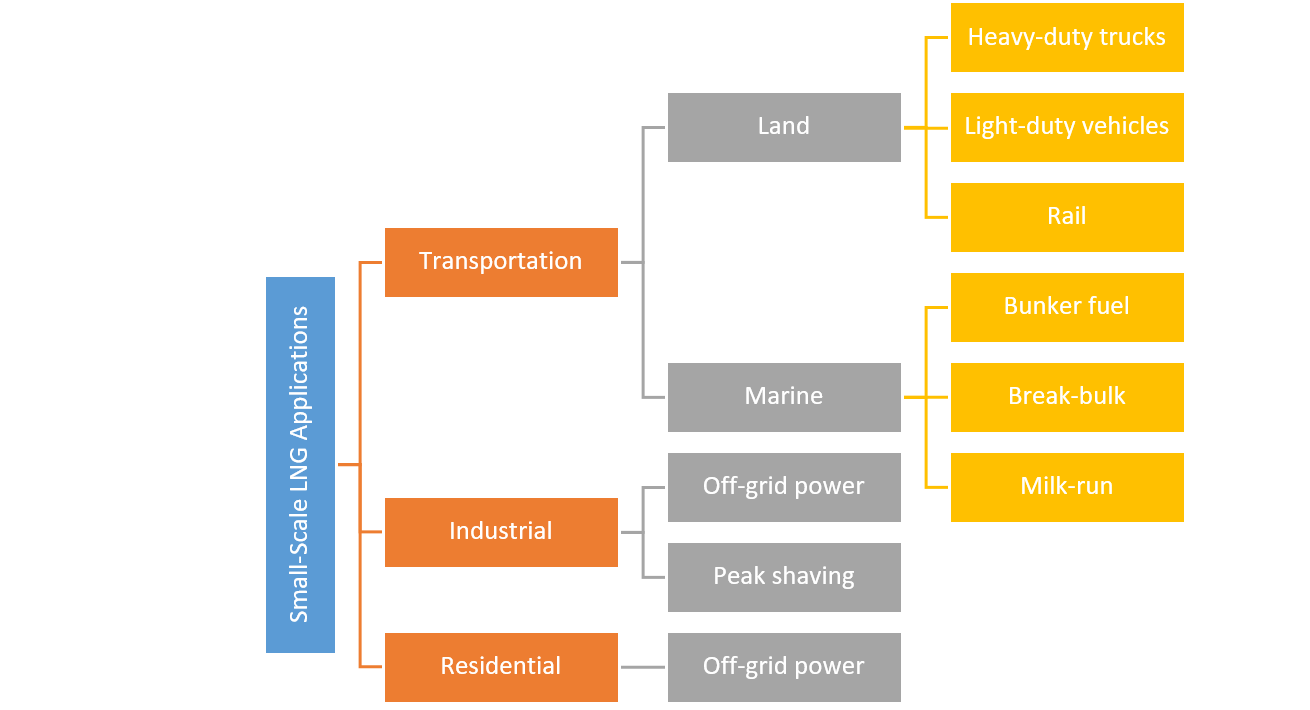 Small-scale LNG is advantageous to conventional LNG in that it requires lower upfront investment, can be operational in a relatively short timeframe and can have quicker returns. In this sense, financing of such projects may be more easily accessible.  Furthermore, the scalable nature provides a flexibility that is ideal for meeting demand fluctuations with the option of adding capacity as demand increases. The role of technology through standardization, modularization and containerization has increased the competitiveness of small-scale LNG and further advancements will continue to drive SSLNG demand.

However, there are also several challenges that may prohibit the growth of SSLNG. The largest hurdle faced by the industry is the lack of economies of scale that conventional LNG infrastructure benefits from, which inherently means a higher unit cost although the underlying investment cost is lower. As the industry is still in its nascent stages, there is a lack of standardization in regulatory and contractual frameworks, as well as international safety standards for the industry. In addition, the intricacy of the small-scale LNG value chain may bring greater logistical challenges and require increased coordination amongst different industry players.

The development of SSLNG has been driven by environmental regulations, decarbonization policies, supply constraints and technology innovation. With regard to small-scale LNG receiving terminals globally, there are more than 25 terminals in 21 countries with throughput capacities from 0.05 mtpa to 1 mtpa. As of April 2022, the total global small-scale import capacity was 15.27 mpta, and global regasification capacity was 901.9 mtpa. Thus, small-scale import capacities accounted for around 2% of global capacity. Figure 2 shows the global existing and expected SSLNG regasification terminals. 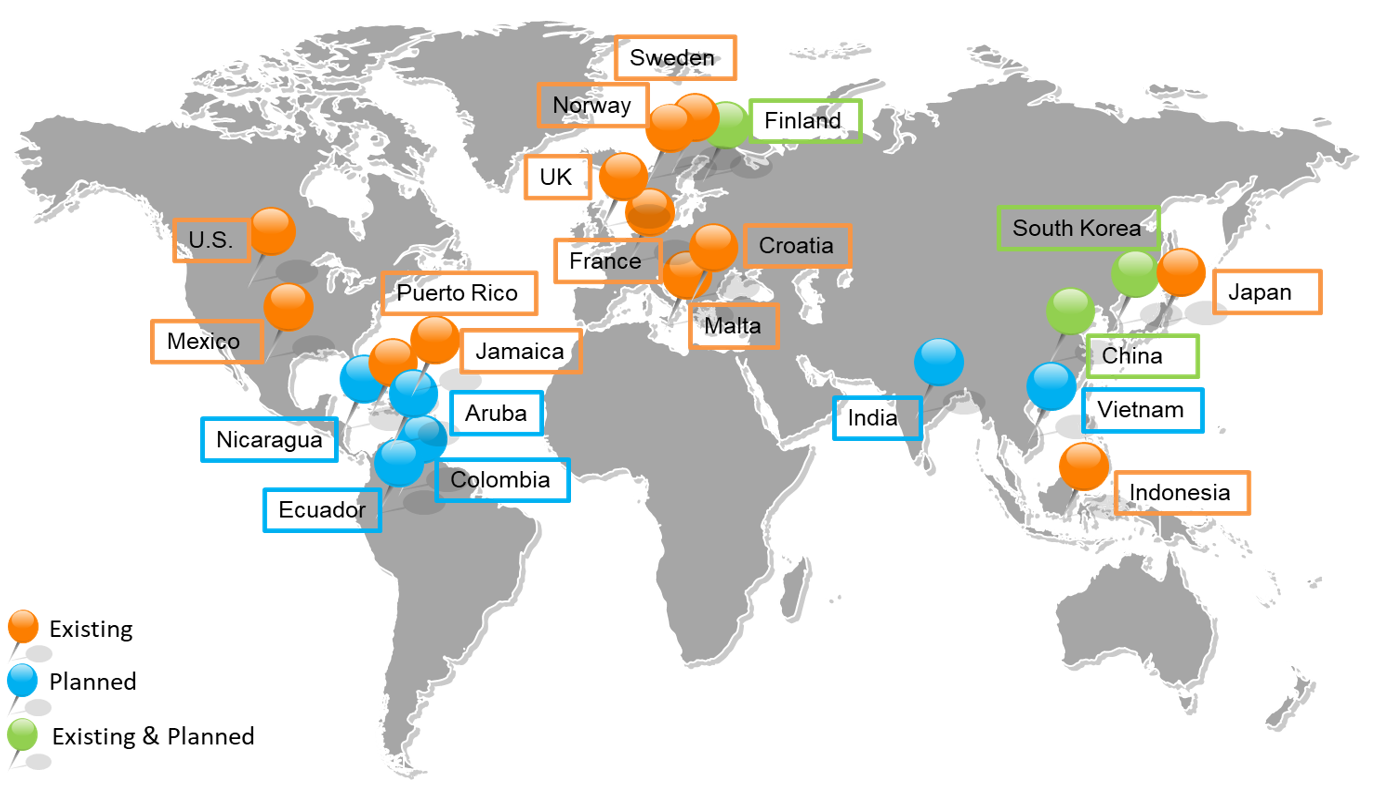 By 2025, we expect the global small-scale import capacity to increase by 51% to reach around 23 mtpa with new players in Vietnam, India, Colombia, Nicaragua, Ecuador and Aruba. Asia will continue to dominate the market, with its capacity increasing by 58% to around 16 mtpa, while Europe is expected to see an increase of 22% to 3.4 mtpa. While Latin America and the Caribbean is expected to see the largest growth, with its capacity increasing by more than 200% to around 1.7 mtpa. Figure 3 below shows the global small-scale regasification capacity by region. 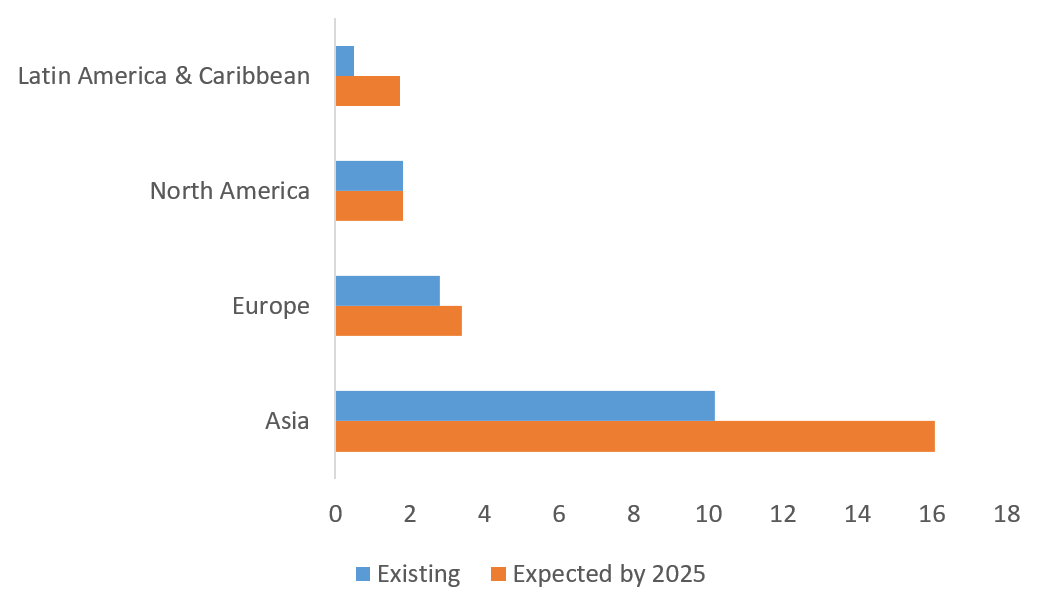 LNG-to-power projects, which focus mainly on the downstream segment of LNG value chain, are a solution that allows Combined Cycle Gas Turbines (CCGTs) to receive gas from floating LNG vessels. The technology and commercial viability of floating facilities including Floating Storage and Regasification Units (FSRUs) and Floating Storage Units (FSUs) have improved over the past decade resulting in the growing popularity of their use for facilitating LNG imports and more so, in the power generation business.

The rapid growth in FSRUs in recent years has been largely due to their cost competitiveness when compared to conventional land-based facilities. In addition, it is a reusable asset which has added to its viability. The cost of a new-build FSRU is typically around $240-280 million with capacities of 3-8 mtpa and 173,000 m3 storage. Considering additional jetty and infrastructure costs, the total capex for a new build FSRU is estimated at around $400-500 million. Now, if we consider the estimated cost for a 3 mtpa onshore regasification plant and 180,000 m3 storage tank, this can be typically in the range $700-800 million. Thus, the cost of a new-build FSRU is around 60-70% that of an onshore facility. The capital cost of the FSRU benefits from standardization of the vessels which lends to easier fabrication, while onshore facilities are subject to local labour costs which may be high and infrastructure constraints.

LNG-to-power projects can play a key role in creating gas demand in new markets as it does not require significant onshore infrastructure and offers valuable flexibility to both producers and consumers. These floating solutions are advantageous over traditional onshore facilities for several reasons including lower capital outlay as these vessels are usually chartered, faster deployment as there is an established global fleet available for charter, fewer permitting barriers, and greater flexibility as they can be easily relocated.

In recent years, the development of LNG-to-power projects has been mainly driven by growing power demand especially in emerging markets and stricter environmental policies aimed at reducing carbon emissions. In Asia, the recent surge of such developments has been mainly driven by the switch from coal-fired power generation to cleaner burning gas, strong growth in power sector demand, declining domestic production and infrastructure constraints. In Latin America and the Caribbean (LAC), oil accounts for a major share of the power generation mix and thus LNG-to-power projects have been largely driven by the switch to gas-fired generation. In addition, most of these countries have infrastructure constraints and relatively small power requirements which make the flexibility of LNG-to-power projects suitable for the region. 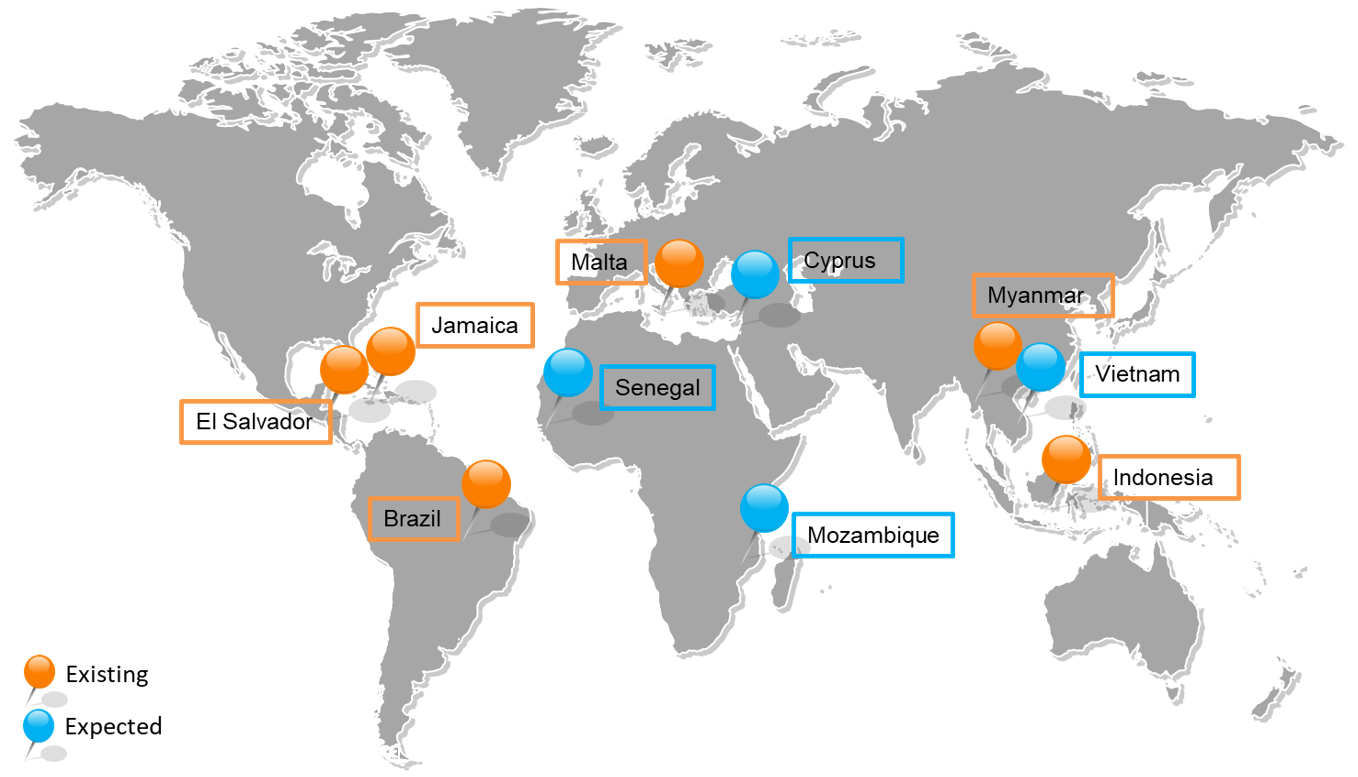 Figure 5 below highlights the existing LNG-to-power projects by region. LAC accounts for the largest share of 64% followed by Asia with 33% and Europe with 3%. With regard to short-term prospects, there are four projects expected to start up over the next two years, which is expected to bring the total LNG-to-Power project capacity to 11,748 MW by 2024. These projects will be in the following countries Vietnam, Cyprus, Mozambique and Senegal. In the medium-long term, several other countries including Cambodia, Sri Lanka, Thailand, Philippines and Myanmar are strong emerging players in the LNG-to-power market. 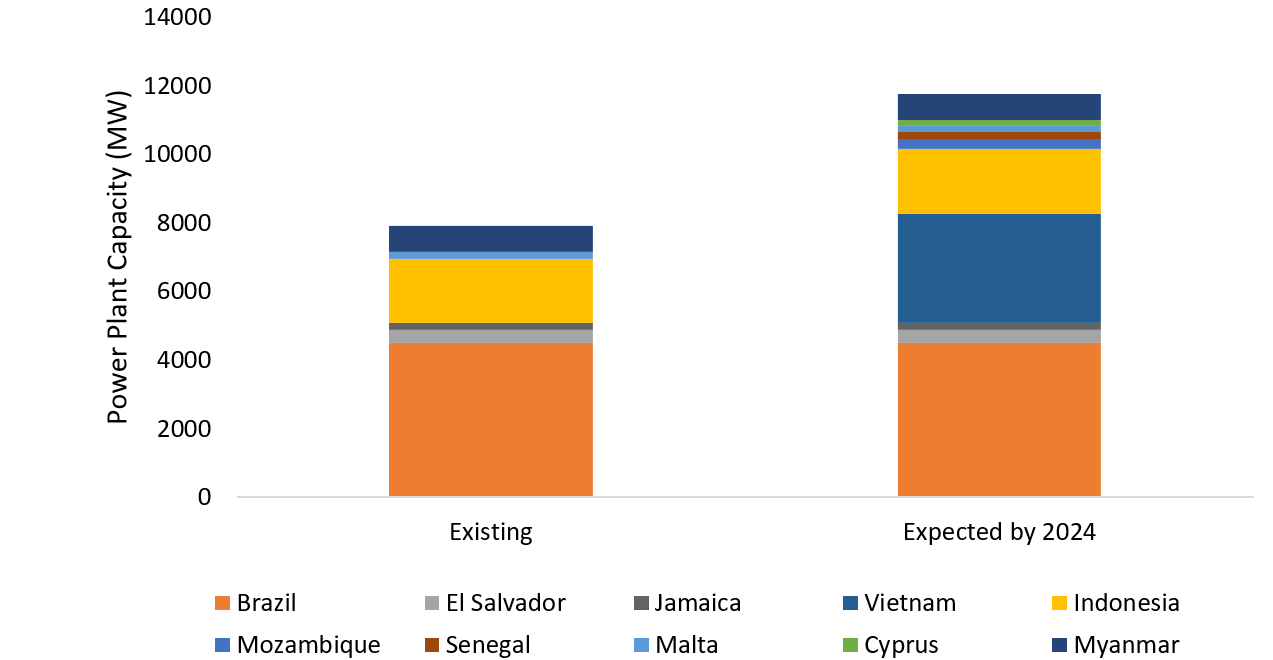 Source: GECF Secretariat, based on data from GIIGNL Annual LNG Report 2021 and 2022

Further development of LNG solutions require significant support from governments, producers, consumers and all other stakeholders. Firstly, support from governments is crucial for any project to be successful. The governments of consuming countries can design policies and regulations that can promote the development of infrastructure and incentivize foreign direct investment. The role of the government is also important to provide clarity and certainty to investors and other stakeholders. These projects can secure affordable, low carbon energy to end users especially in off-grid areas or geographical constraints, positively impacting on these economies.

Secondly, collaboration amongst key stakeholders and more so, producers and consumers can create mutually beneficial business models. This can be in the form of joint investment, joint technological research or exchange of expertise.

As seen in the previous chapters, the configurations of SSLNG and LNG-to-power value chains involve numerous additional players and a more complex dynamic compared to the traditional LNG value chain. The intricate nature of the operations for instance LNG trucking require a high-level of coordination amongst stakeholders, as well as optimization of infrastructure and logistics.

In addition, it is important to develop the human resources and capabilities to operate and maintain these systems that may be relatively new in some countries. For instance, with regard to SSLNG, it requires a skilled labour force especially related to the safety and environmental aspects.

The significant growth in SSLNG and LNGP projects have allowed LNG penetration into niche sectors particularly, the transportation sector with several land and marine applications, as well as the power and industrial sectors. It has also facilitated the expansion of its reach into new markets where geographic and infrastructure constraints may have prevented it before. Over the next 2-3 years, these markets will continue to expand driven by environmental regulations, decarbonization policies, technological advancement and energy security.

The global small-scale import capacity was 15.27 mpta in 2022 and is expected to reach 23 mtpa by 2025, with new capacity coming from China, Finland, India, Vietnam, Colombia and Nicaragua. Asia accounts for the largest capacity with 67%, followed by Europe with 18%. In terms of the largest growth expected in this period, this is expected from Latin America and the Caribbean with its share expected to increase to 7% by 2025.

The global capacity of LNG-to-power projects from FSRUs and FSUs was estimated at 7,903 MW with Latin America and the Caribbean accounting for the largest share of 64%, followed by Asia with 33%, and Europe with 3%. With regard to short-term prospects, the total LNG-to-Power project capacity is expected to reach 11,748 MW by 2024. These projects will be in the following countries Vietnam, Cyprus, Mozambique and Senegal. In the medium-long term, several other countries including Cambodia, Sri Lanka, Thailand, Philippines and Myanmar are strong emerging players in the LNG-to-power market.

While there has been significant growth in these projects, some have not been realized as anticipated due to various challenges including lack of policy support and standardization of regulatory and contractual frameworks. Furthermore, the current high price environment may also deter investments in these projects in the short term. Thus, in order to overcome the barriers faced by these projects, there is a strong need for policy support, coordination and collaboration amongst market players, government support via the right policies and regulations and human capacity building.

Oxford Institute of Energy Studies (OIES). (2021). Developments in the 'LNG to Power' market and the growing importance of floating facilities .

PWC. (2017). Small going big: Why small-scale LNG may be the next big wave. Retrieved from https://www.strategyand.pwc.com/gx/en/insights/2017/small-going-big.html

U.S Department of Energy. (2020). Opportunities for Small-scale LNG in Central and Eastern Europe.