Expert Commentary - A Look at Global Gas and LNG Prices in 2020: How Has It Coped With Recent Market Dynamics?

The start of 2020 has witnessed an unprecedented change across all sectors worldwide, and the energy sector is no exception. As gas and LNG prices continued their bearish trend from 2019 due to an LNG supply glut and mild weather conditions, it hit another stumbling block, COVID-19. Gas demand in China drastically dropped due to stringent quarantine measures and travel restrictions to curb the spread of the virus, which weighed heavily on economic and industrial activity. While the rate of new cases in China has started to decline, Europe has become the epicenter of the outbreak. More and more countries are moving into lockdown mode as governments put stricter measures in place, in an attempt to prevent the spread of the virus and minimize the strain on its health systems. Consequently, flights have been drastically reduced and billions of people are now working remotely which has resulted in reduced demand for fuel across all sectors.

On top of the COVID-19 pandemic, the oil price war between oil producing giants Russia and Saudi Arabia has made matters worse. This was triggered by a disagreement to deepen production cuts by the OPEC+ group on March 6th 2020 and the reaction by Saudi Arabia to hike its production by approximately 300,000 bbl/d to 10 million bbl/d and even increase to a high of 12.3 million bbl/d in April 2020. This immediately impacted the market as oil prices plummeted by about 30% on March 9th 2020, with Brent falling to an in-day low of $31.02/bbl and WTI dropping to $27.34/bbl. Since then, oil prices have continued to decline with no real rebound in sight.

Figure 1 below illustrates the trend in daily gas and LNG spot prices as the market responds to these events. At the start of 2019, European and Asian spot gas and LNG prices were within a range of $7-9/MMBtu, after which it suffered a sharp decline over Q1 2019 and converged within a $4-5/MMBtu range. The price slump continued throughout 2019 with TTF and NBP dipping below $3/MMBtu and HH reaching a low of $1.75/MMBtu. While the NEA Spot LNG price was at a premium to European prices at the start of 2020, prices deteriorated in February reaching lows of $2.70/MMBtu as the effects of COVID-19 were felt by the market. As of March 20th 2020, there has been some price recovery as life is starting to return to normal in China. Furthermore, due to the oil price lag in long-term contracts, the effects of low oil prices would be observed in the second half of 2020 and in 2021.

The drastic drop in oil prices has seen coal changing from the camp of the cheapest fossil fuel in the world to the most costly fossil fuel. For instance, on March 20th, Australia’s Newcastle coal was priced at $66.85/ton, approximately $27.36/boe, while the ICE Brent futures was settled at $26.98/bbl, 38 cents lower than the coal price. If such occurrences become more frequent, this can significantly influence prospects for global energy demand in going forward.

The impact of current market conditions on gas demand is two-fold, on one hand, it can stimulate demand by increasing its competitiveness compared to other fuels, and on the other hand, reduced economic, industrial and commercial activity can reduce baseload demand. Sustained low oil prices are expected to boost the competitiveness of gas in many Asian countries including China, Japan and South Korea. India continues to take advantage of low spot LNG prices, absorbing uncommitted cargoes that may have otherwise been bound for China, in order to suffice demand in the city-gas and power generation sectors.

The increasing price competitiveness of gas, from both oil-linked long-term contracts and spot LNG, is expected to support coal-to-gas switching in Asia. Figure 2 below illustrates the changing price dynamics between gas/LNG and coal prices in Asia on an energy equivalent basis. There has been a significant drop in the NEA Spot LNG price since the start of 2020 and in February, the monthly average NEA Spot LNG price dropped below the China Qinhuangdao (QHD) coal price, which averaged $4.18/MMBtu, to a low of $2.92/MMBtu. 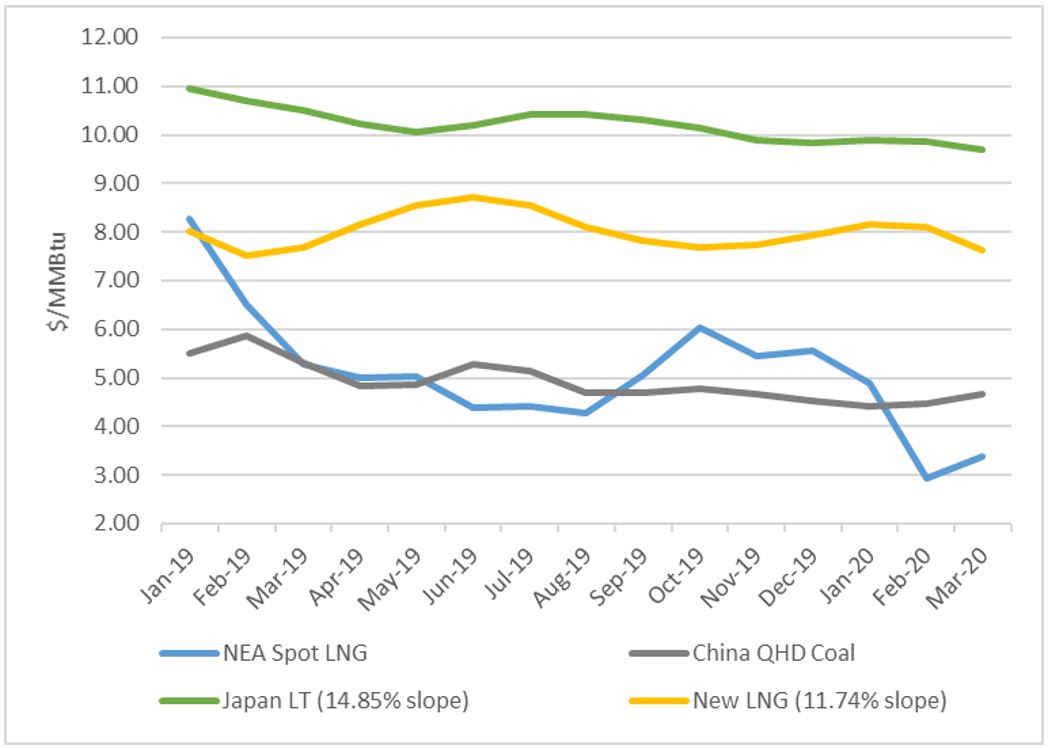 As countries in Europe go into lockdown, demand for power generation has slowed.  Data from Entso-e showed that daily demand on March 16-17, 2020 were down by about 15% in Italy, 9% in France, 6% in the UK and 2.5% in Germany compared to the previous year. However, LNG sendout in Europe remained resilient in March with pipeline flows from Russia holding steady, flows from Norway increasing and storage injection starting in order to balance the system.

In terms of trade and contractual obligations, this situation has raised several issues between sellers and buyers. In early March, the China Council for the Promotion of International Trade (CCPIT) announced their decision to offer force majeure certificates to local companies in the event that they could not meet their contractual obligations. China’s largest LNG importer, China National Offshore Oil Corporation (CNOOC) had suspended contracts with at least three suppliers. Total and Shell has rejected force majeure claims from Chinese LNG buyers. Market participants have also stated that the result of such claims will be unique to the stipulation in each contract.

Prior to COVID-19 and the decline in oil prices, LNG buyers, in particular Asian buyers with long-term contracts indexed to oil, were facing a dilemma where a spot LNG cargo was readily available at almost half the price of the same LNG cargo under their long-term contract. At the same time, buyers recognized the security and sustainability of supply offered by long-term oil indexed contracts. This resulted in dissatisfaction amongst buyers and in some cases led to their willingness and interest for renegotiation, arbitration and invocation of their Downward Quantity Tolerance (DQT) in LNG contracts if possible. Over the past five years, new long-term LNG contracts have included oil-linked slopes ranging from 11-12%. These contracts, combined with sustained low oil prices is likely to increase buyers’ preference for oil-linked contracts.

The global gas market will continue to be challenged in the short to mid-term by a glut in LNG supply, reduced gas demand aggravated by a deceleration of the economic and industrial activities worldwide, low gas prices and further uncertainty expected as the oil price war continues and the world picks up the pieces post-COVID-19.