Air pollution and global warming have led to more stringent regulations on CO2 emissions from passenger and light commercial vehicles (LCVs). In this context, electric vehicles (EVs) have become an alternative to internal combustion engine (ICE) vehicles, since EVs produce lower emissions over their life span. Automotive industries continue to unveil new EV models, while policymakers are deploying more support to build adaptation for them. Utilities are also considering the impacts of EVs charging on electricity demand, electric utility load, and energy pricing and subsidies.

According to the GECF Global Gas Model (GGM) –a high-end modelling tool covering energy balance estimates in 34 sectors, among other– the market share of EVs will boom from just 1.4% in 2019 to 43% by 2050. As a result of this remarkable rise in EVs, the emissions from the passenger and LCVs in road transport sector will steadily drop by 7% from 3,685 million tonne CO2 (mt CO2) in 2019 to about 3,420 mt CO2 by 2050. This is noticeable, while at the same time, the total number of passenger and LCVs will increase enormously by 63%. Subsequently, in 2040, new sales of passenger and LCVs of battery electric vehicle (BEV), hybrid electric vehicle (HEV) and plug-in hybrid electric vehicle (PHEV) altogether will globally surpass new sales of ICE.

EVs can become more economical than ICE vehicles due to policy contributions and robust encouragement, respectively. Several countries have already announced targets to phase out ICE vehicles in the transition to EVs, such as Norway (2025), and Denmark, Iceland, Ireland, Netherlands, Sweden, Slovenia, and the United Kingdom (2030).

In the U.S., President Joe Biden has announced plans to replace approximately 650,000 of the government’s vehicles with EVs assembled in the U.S. [1]. Furthermore, last September, the governor of the state of California signed and ordered to phase out the sale of all gasoline-powered vehicles by 2035. Other U.S. states are also considering following in California’s lead [2]. Meanwhile, South Korea will ban diesel vehicles from public sector by 2025 [3]. As part of the efforts to further pave the way for greener vehicles, the registration of new diesel cars and taxis in Singapore will cease from 2025 [4]. Over in South Asia, the Indian government has set an ambitious goal of 30% EVs by 2030 from the previous 100% target [5]. In China, the  government is supporting the transition from ICE vehicles to new energy vehicles (NEVs), which include battery-powered electric, plug-in hybrid and hydrogen fuel-cell vehicles. China has set an NEVs target of a fifth of all auto sales by 2025, which is estimated to be 20% of all new car sales [6].

Automotive manufacturers, such as BMW Group, Ford, General Motors (GM), Hyundai, Jaguar Land Rover (JLR), Tesla, Toyota, Volkswagen, Volvo, and others have all devoted considerable investment in the electrification of their vehicles in response to changing appetite in the coming years.

Last year, BMW Group, with its brands Mini and Rolls-Royce, announced that its sustainability goals aim at more than seven million electrified (all-electric or plug-in hybrid) driving system vehicles by 2030.The BMW Group expects that the emissions produced by its vehicles per kilometre driven will be reduced by around 40% by 2030 [7]. Ford announced in February 2021 that by mid-2026, all of its passenger vehicle range in Europe would be zero-emissions capable. Furthermore, all-electric or plug-in hybrid products would move to all-electric in Europe by 2030 [8]. A month earlier, in January 2021, the the largest U.S. automaker GM announced its plans to be carbon-neutral by 2040, as well as its aspiration to eliminate tailpipe emissions from new light-duty vehicles by 2035 [9]. Meanwhile, the JLR brand has set a target to become a net-zero-carbon business by 2039, and has stated that all its models will be electric from 2025 onwards [10]. Toyota intends to sell over 5.5 million electrified vehicles by 2030, including more than one million zero-emission vehicles comprising of BEV and fuel-cell electric vehicles. Toyota aims to reduce CO2 emissions by 25% over the entire vehicle lifecycle compared to 2013 levels [11]. Volvo is the latest major manufacturer to join the chorus and announced, in March 2021, that it will be phasing out the production of all ICE and hybrid cars, and will become a fully electric car company by 2030 [12].

Taking into consideration the large scale of ICE vehicle fleet, the pace of transition is expected to be slower in regions, where not only economic growth and policy advocacy, but also infrastructure is not available to support the transition to the era of EVs. As Figure 1 (below) depicts, EVs will account for the bulk share of passengers and LCVs in Asia-Pacific with over 60%, followed by North America at 19%, and Europe at 18% by 2050. In other regions, the share of EVs would be less than 1% of total units. 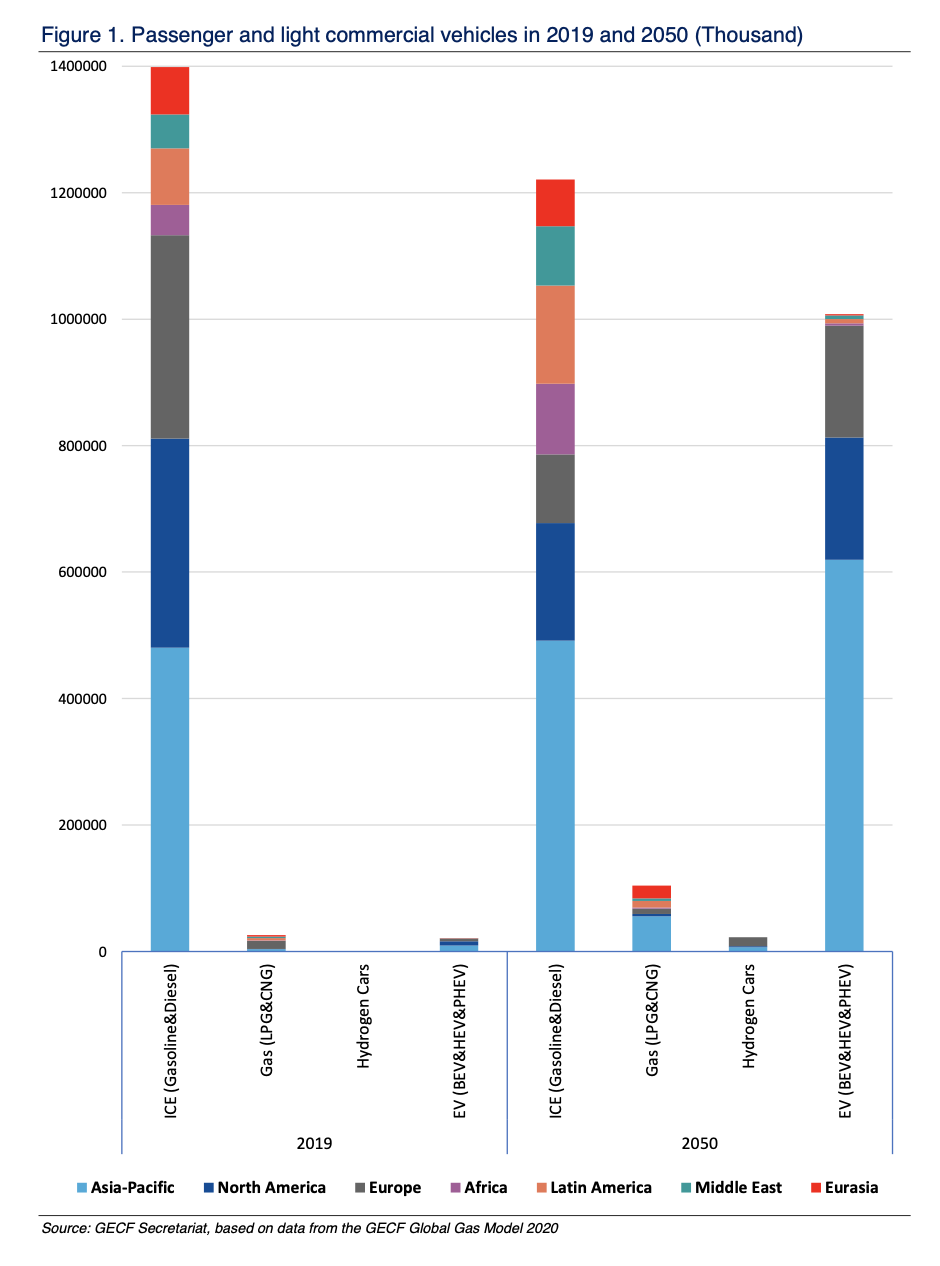 It should be noted that the EVs obtain their power from electricity, which is provided by electricity grids. Nevertheless, the basic source of the required electricity poses a big question. By transforming primary energy sources, such as natural gas, coal, nuclear, and renewables into electrical power, electricity arises, which is arguably a secondary energy source to charge EVs. Moreover, a higher share of EVs in the passenger vehicle fleet would translate into numerous challenges for the electricity production and transmission systems. For example, the increased reliance on EVs will potentially cause considerable impact over an energy grid’s generation capacity.

According to the GGO 2050, natural gas and renewable energy sources will altogether provide almost 60% of the electricity supply by 2050. Eventually, as Figure 2 (below) shows, the global electricity demand from the passenger and LCVs in road transport sector will substantially increase by an annual average growth rate of 15% from 18 Terawatt Hour of Electricity (TWh(e)) in 2020 to about 1,535 TWh(e) in 2050. Therefore, any progress in the use of EVs will lead to a correlation growth in the utilisation of electricity and its primary energy sources, particularly of natural gas and renewables.

This is beside the point that the share of natural gas vehicles (LPG and CNG) is expected to gradually increase from 2% today to 4% by 2050.

In conclusion, it can be considered that if the world decarbonises more rapidly with aggressive scenario aiming to be carbon neutral or to reach the net-zero emissions target, then EVs’ adaptation and demand would rise faster than expected. Consequently, depending on the speed of this adoption, the EVs might not have enough reliable electricity to receive the support at this point.

The cost of renewable energies is declining, however it is a fact that renewables still face major obstacles, including but not limited to high capital costs, that cannot compete with cheap and abundant gas, intermittency and variability, transmission infrastructure, as well as lack of storage capacity.

In this context, natural gas exhibits complementary characteristics to cater for the abovementioned drawbacks of renewables, namely reliable, foreseeable production profile, as gas is already part of the “baseload” production profile (displacing coal) in several major countries, including the U.S. The decarbonisation agenda and corresponding EVs penetration imply a mild greenhouse gas profile of the “baseload” power production segment, and natural gas provides exactly this feature.

Therefore, given the anticipated exponential growth in EVs and in a position to disentangle the transition, the GGO 2050 encourages countries, particularly those that promote the utilisation of EVs, to effectively invest in gas power plant projects. This is considerable when emerging technologies, such as new drilling techniques, together with hydrogen and syngas combined cycle gas turbines with lower heat rates, not only demonstrate high-energy efficiency, but also markedly reduce the cost of electricity produced from natural gas. As an illustration, companies such as Mitsubishi Hitachi Power Systems (MHPS) have succesfully conducted tests using a blend of 30% hydrogen and natural gas to drive large-scale gas turbines. As a result, MHPS was able to curtail CO2 emissions by 10%, which is a positive step towards hydrogen-only combustion that would lead to diminish emissions to almost zero [14].